Mon Cheval Friesians has just given us word that they’re going to donate a free breeding to their imported Friesian stallion Zorro!  Zorro has 7 USDF All Breed Horse of the Year Awards, an IFSHA World Championship and Reserve World Champion in Musical Freestyle.  And he’s also now qualified with the “Sport” moniker, earned in Dressage, meaning that the FPS/FHANA has recognized Zorro as one of the absolute best in competition – consistently so.  The “Sport” predicate is so exclusive and rare, only 4 other horses have been awarded that title in Dressage in North America! 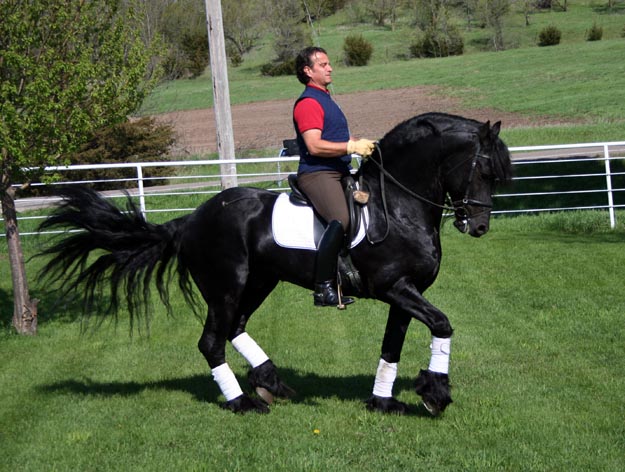 Zorro is an approved breeding stallion with the American Warmblood Society, Friesian Sport Horse Registry, International Friesian Heritage Horse Registry, and the Moriesian Horse Registry.  He has had Inspection Site Champions and Reserve Champions with the AWS, FSHR, and the FHHR. Because of his Beauty, Temperament, Trainability and Athleticism, Zorro’s offspring are highly sought after.

Normally, a breeding to Zorro would have a value of $850 – plus collection costs and shipping.  Mon Cheval has donated the breeding, with a live foal guarantee…and all you’d be responsible for is the collection costs and shipping.  Free breeding, to one of the very best Friesian stallions on the continent.  Obviously this is of interest to a relatively small segment of the general population…if you’re not sure if you’re in that segment, check to see if your head just asploded.  If it did, then you’re in this segment.  Congrats!  Oh, and you might want to find a hat for coming to bid at the auction…since your head asploded.